I’ll come right out and say it: I like the ballet. (I don’t know if you’ve read reviews, but, trust me, I’m in the minority.) I find it flawed but full of ideas, and, because of that, exciting. I like the music, by Bryce Dessner; it’s imaginative and brimming with color: there are hints of medieval court music, a whiff of chant, a smattering of atonality, and at least one lovely folk melody, as well as evidence of the inevitable and ubiquitous influence of Phillip Glass. The heavy, colorful, Deco-ish costumes, I like even more. A particular favorite is the black-on-white tutu design for the nine muses—worn with a Zorro mask and a Louise Brooks bob—but also the wizard-like costumes for the monks, the adorable metallic bean-bags for the kids, the heavy helmets and walking sticks for the Kings. The look is lodged somewhere between 1920’s science-fiction fantasy and medieval fairy tale. Everything looks vaguely homemade. The ideas are by the artist Marcel Dzama, who also created a colorful front curtain; Marc Happel, the excellent costumier at New York City Ballet turned these ideas into something people can actually dance in. (For the most part.)

This is Justin Peck’s first story ballet, though he flirted with narrative in his earlier work “Paz de la Jolla,” which had a beautiful underwater scene. Here, he based himself on a tale by Hans Christian Andersen, about a young man who invents a magical clock which, on the hour, produces magical figures that dance. First, a cuckoo, second Adam and Eve in the Garden of Eden, third the Three Wise Kings, etc. You can see the attraction of such a tale: it hardly has a story at all, and offers ample opportunities for dancing. Probably out of fear of boring people, or out of mistrust of ballet’s ability to convey plot, Peck stints on the exposition. This is an error. How can we care about the story if we don’t really know what it is?

He gives the character of the young protagonist (“The Creator”) an exceedingly brief mime sequence in which to explain his invention. This leads directly into a pas de deux, which, as a result, comes far too soon. The duet, with its echoes of Sleeping Beauty, is very fine—and is accompanied by a lovely melody— but, because of its placement, has next to no emotional resonance. (A later duet, for the princess and a dark prince, The Destroyer, is much more effective.)

After that, it’s off to the races, with one divertissement after another. Many include props: an apple, walking sticks for the kings, candles for the monks. They limit the dancers’ movements, but also add interest. The Destroyer’s club is the most remarkable example of this; he is forced to partner the princess with only one hand while, with the other, he pushes, pokes, prods. Peck shows a remarkable, and unfashionable, interest in tailoring the steps to the visual designs. This is clearly a conscious choice, a kind of throwback to the Ballets Russes. And in fact, the ballet is full of references to ballet history, as when the muses stand with their legs extended at different heights, evoking “Apollo.” There’s some “Firebird” in there too, and Oskar Schlemmer’s “Triadisches Ballet.” And who knows what else.

But here we butt against another problem: a lack of characterization in the divertissements. Why are the five senses all identical, and all dressed in—admittedly fabulous—top-like dresses that float when the dancers twirl? Why are the muses the same? And the seven deadly sins? Opportunities for variety are wasted. As if to make up for lost time, Peck has made some of the dances, like the one for the cuckoo, extremely busy. Conceived for Tiler Peck, the cuckoo’s choreography consists of constantly skittering footwork, beaten jumps, spins. But for all its difficulty, there’s nothing memorable about it. The dances that work best, like the pas de deux for Adam and Eve, are the ones in which Peck has thought most about the characters, distilled some detail of their stories. (Rebecca Krohn is exceedingly lovely, innocently sensual, as Eve.) I especially like the moment, at the end, when they join hands with the eleven children. The fruit of knowledge has borne its fruit.

The ballet finds focus toward the end, after the entrance of the Destroyer. With heavy swings of his club, he strikes down the other characters, one by one. He slices Adam’s neck; clubs the gambler; knocks over the children like bowling pins. Then he claims his prize. But the figures fight back. They rise up and, together, vanquish the intruder. As Andersen wrote: “Dead men cannot walk the earth. That’s true, but a work of art does not die. Its shape may be shattered, but the spirit of art cannot be broken.” It’s a lovely idea. Peck should not be deterred from  telling stories; he should just learn to do it better.

I had the good fortune to spend time with her last year, when I was preparing a profile of her for The Nation magazine. Those hours were amongst the most delightful I have spent with anyone. I brought her maccaroons and tea, which we ate in her hotel while we talked. One night, we went to the ballet. It was a privilege to sit next to her.

I miss her, as do many, many other people.

My latest two features for the Times touched upon two different worlds: the world of the dance accompanist, and that of the movie choreographer.

The first was a musing on the secret life of dance pianists. I spoke with Cameron Grant of New York City Ballet and Michael Scales of New York Theatre Ballet, as well as countless others, to find out how they train, what the challenges are, and what keeps them inspired. Here’s that piece.

And the other was on Jack Cole, known in some corners as the “Father of Jazz Dance”. The dance writer Debra Levine recently organized a retrospective of Cole’s movies at the Museum of Modern Art. Which led me to watch  a good number of these films… That piece is here.

Looks like I have some catching up to do…

Since my last post (of Jan. 20), New York City Ballet has reached the midpoint of its winter season. Here are a few glimpses of what’s gone on so far.

On Jan. 22, I reviewed two mixed bills, one including Liebeslieder Walzer and Glass Pieces, the other Ballo della Regina (a not very inspiring performance), Kammermusik No. 2, And Tchaikovsky Suite No. 3. You can can read my review, for DanceTabs, here. 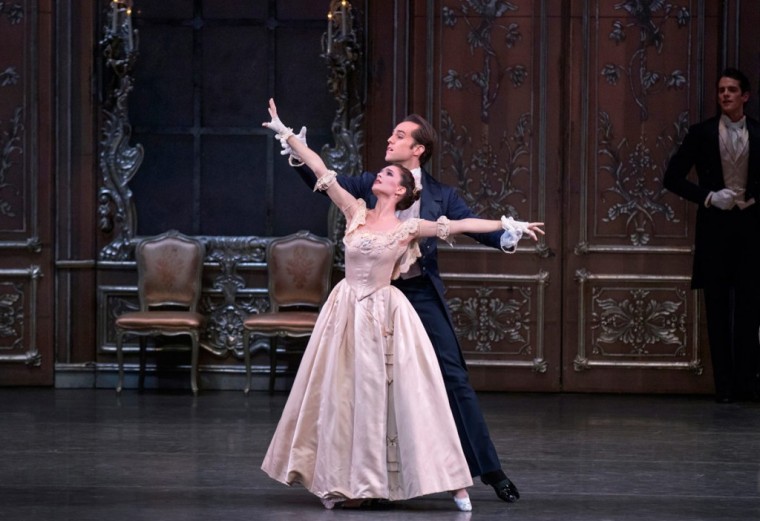 Then, on Jan. 27, I reviewed a wonderful all-Balanchine program: Walpurgisnacht Ballet, Sonatine (jazzily danced by Tiler Peck), a luminous Mozartiana, and a pretty good Symphony in C. The review is here.

While I was down in Sarasota, I watched rehearsals for Miro Magloire’s new ballet for Aida. It was fascinating to see him navigate the challenges of choreographing for opera: restricted space, weird footwear, fabric, tempo. I wrote about it here, for DanceTabs.

The Trisha Brown Dance Company is completing its three-year Proscenium Works Tour, after which the company will transform itself into a smaller, more nimble entity. Brown’s large pieces will likely never be performed by her company again. An important, and moment of transition for the company. Her dancers came to BAM one last time at the end of January, where they performed Set and Reset, Present Tense, and Newark (Niweweorce). My review for DanceTabs is here.

The Baroque-Burlesque company Company XIV, which created a very effective Nutcracker a few years ago, is back with a new decadent evening, a naughty version of Snow White. Decadent it is, an sumptuous to look at, but unfortunately, not tight enough to hold my interest for two hours. Here’s my review, for DanceTabs.

Gemma Bond, a dancer with ABT, produced her first full evening of works, danced by a group of her friends (all wonderful dancers). The evening was a bit of a throwback, with much loveliness all around. My review is here.