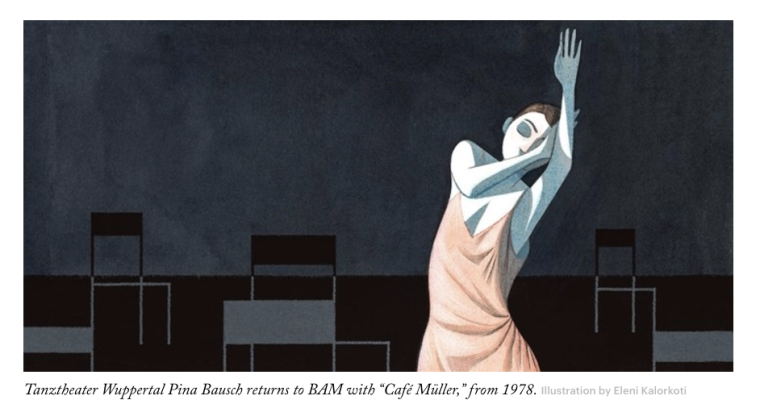 Some things to look forward to (on the dance front) this fall:

In the eight years since Pina Bausch’s sudden death, her company, Tanztheater Wuppertal Pina Bausch, has soldiered on, performing her emotionally strenuous dance-theatre works. At bam (Sept. 14-24), the troupe presents two scorchers, “Café Müller” and “The Rite of Spring,” both made in the seventies, before a hint of gentleness began to creep into Bausch’s world view. The first is set in a chair-strewn room, where nightmarish personal dramas play out to the music of Purcell. The other takes place on a dirt-covered stage, a sombre setting for a hair-raising ritual of immolation.

A redemption of sorts can be found in “A Love Supreme” (New York Live Arts, Sept. 27-30), Anne Teresa De Keersmaeker’s collaboration with Salva Sanchis, a former member of De Keersmaeker’s company, Rosas. With a mix of choreographed movement and improvisation, Sanchis and De Keersmaeker have conjured a physical counterpart to John Coltrane’s famous 1964 album. It is danced by four men, each of whom closely scans a musical line played by a different member of Coltrane’s legendary quartet.

Alexei Ratmansky’s affinity for the music of the contemporary Russian composer Leonid Desyatnikov has produced some of his most original ballets, including “Russian Seasons” and “Old Women Falling Out.” His newest work for American Ballet Theatre (the season runs Oct. 18-29, at the David H. Koch) premières on Oct. 18, with a score by the same composer, “Bukovinian Songs,” a suite for solo piano based on Ukrainian folk tunes. Ratmansky’s other recent Desyatnikov ballet, “Odessa,” will be part of New York City Ballet’s fall season (Sept. 19-Oct. 15, at the David H. Koch).

Ask any dancer her favorite dance film, and she’s likely to name the 1948 surrealist melodrama “The Red Shoes,” about a ballerina (played by Moira Shearer) driven to self-destruction by her love of dance. Who better to adapt this gory tale for the stage than the British choreographer Matthew Bourne, who brought us a danced version of “Edward Scissorhands”? At City Center (Oct. 26-Nov. 5), the role of the aristocratic, tenderhearted, and obsessive heroine will be performed alternately by Ashley Shaw, of Bourne’s London-based company New Adventures, and N.Y.C.B.’s own drama queen Sara Mearns.

An impossible love story drawn from Persian myth lies at the heart of “Layla and Majnun,” a 1908 opera by the Azerbaijani composer Uzeyir Hajibeyli. In Mark Morris’s version (in the White Light Festival, at the Rose Theatre, Oct. 26-29), the singers and players—members of the Silk Road Ensemble—sit in the center of a tiered stage, as, all around them, dancers from the Mark Morris Dance Group reënact the story of the star-crossed lovers.